Well, it's not looking like TD got the job at Think Tank. Of course, we don't know for sure because we can't get the leader of this research group to communicate with us! It's been almost 3 full months since his visit. He emailed this woman in mid-January just to ask if she had any information she could share about how the job search was progressing, he was still interested in the position, etc. Three days later she finally emailed and said that they were still interviewing and deliberating, but that she hoped to have some info for him by the end of January.

So, last Friday, with nary a word or any communication from these people, TD emails again and asks if his application is still being considered for the position - he certainly hopes it is, because he continues to be interested in the organization, etc.

It's Thursday and he still hasn't heard anything from this woman - I doubt he will.

I'm thinking that they've already hired someone (or have made offers and are in negotiations) and that this person is either too lazy or too chicken shit to let TD know (or both). To say nothing of the gross unprofessionalism of not responding to emails for days at a time (if ever!), this delay is effecting what we need to do in order to make visa arrangements for him next year.

So, um, he can come see his baby being born and all!

Fortunately, TD will get a hefty parental leave next year that will allow him to come and be here for the entire academic year with summers at either end. And his tenure clock will stop. Hence the title of this post.

But, his coming here without a job (which looks pretty certain) means that we need to get him a spousal visa so he can spend extended time here (they're good for 2 years). The longer we delay, the more that the processing period for the visa application will cut into time that he'd like to be here with me.

It's a very good thing I got pregnant (for many reasons) but it means that at least for a year, our commute is postponed. I don't relish the thought that he'd have to go back the next year if he can't get a job here during his parental leave, but I'm trying desperately not to think of that.

So, a pox on Think Tank!
Posted by medieval woman at 8:26 AM 8 comments: Links to this post

As heard in the Target yesterday...

Thank you all for your lovely well wishes on my last post! Medieval Manatee continues to grow and stretch its surroundings (sometimes with painful twinges) - still no morning sickness - we will go in to hear the heartbeat on March 5. Manatee emerges in early October. Craziness will ensue.

TD and I were in Target yesterday (seeking a new bathmat) and we walked by the toy aisles. We decided to walk through (after all, we need to get up to date on this crap, eh?). I was horrified by the gender coding and all the creepy dolls that exhort the little girl to "be like mommy" and grocery shop, cook, vacuum, oh, and have babies! As soon as they have a "be like mommy" neurosurgeon set I'll buy it.

So, we wander into the Star Wars figures and I start to breathe a little easier - I was raised on Star Wars figures and I had a shitload of them (which my mom GOT RID OF!!! THE HORROR!!! THE BETRAYAL!!!!). We were talking about what the cool ones were, how they looked more cartoony than they used to, whether they were making AT-AT Walkers anymore, etc. You know, the usual stuff.

I lose interest and wander off to the games (Clue! Stratego!), but apparently there was a 40-year-old man who had also been looking at Star Wars figures. After seeing that I'd walked away, he leans conspiratorially toward TD and asks, "heh, heh, which one are you looking for?" TD explains that we were just getting the lay of the land for an impending manatee arrival. The dude continues, "well, I'm looking for the Princess Leia slave figure. I've got all of the Princess Leias but that one. That's the coooooooolest one..." TD wishes him luck and goes to find me.

After he tells me this story, I realize that he'd just had an encounter with one of those skeevy, acne-ridden, geek boys of my childhood (and I don't malign all of them - some of them were my friends for better or worse) - you know, the ones who positively fetishized that image of Princess Leia in a gold band-aid and a cocktail napkin chained to the giant grub Jabba the Hutt: 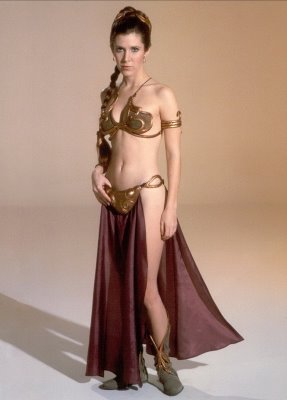 Out of all the costumes she has in these movies (anyone remember the two giant danish strapped to her head?), that's the costume these guys always remember. I won't dissect the gender politics of this - I don't need to. But I realized that some of those guys never changed when they grew up - at age 40, they're still trying to get their hands on the Princess Leia slave figure!!! Gag me with a smurf.

That's why this one was always my favorite: 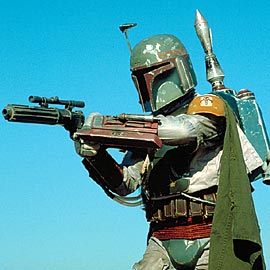 Posted by medieval woman at 8:50 AM 3 comments: Links to this post

We're gonna have a baby.

We just found out yesterday and I've been thinking: should I blog it? Should I wait? Then I thought: what the hell? If (god forbid) something does happen b/c it's still early, would I regret telling you guys? Nope - not at all.

TD is through the roof with joy (and researching how much calcium I need a day, etc.) - and I'm just trying to keep my eyes open all day long! I've decided (after looking at artists' renderings of a 6-week old embryo online) that I must be giving birth to a manatee b/c that's what it looks like.

I stayed up for the men's short track final, but it's now way past my bedtime...

P.S. I hereby retract this whiny post - apparently I was actually pregnant when I wrote it. Yeesh! How embarrassing...
Posted by medieval woman at 10:45 PM 25 comments: Links to this post

Life is such a bore right now I almost put myself to sleep thinking about it. *yawn!*

Basically, it's been snowing here (as almost everywhere), but I live in a place where they just can't handle that, so classes were canceled Monday and yesterday. So I stayed home. And watched TV and read Chaucer. Did I work on my book ms? My Intro? Nope.

Other than that, it's been a couple of weeks of endless meetings, job talks from job candidates, more meetings, dinners with candidates (free meal, though!), and missing TD terribly.

So, basically I'm blogging to say that I'm still here, not in a snow drift.