And the nominees are...

Thank you guys! Lessee, it was Belle, heu mihi, and Adjunct Whore who nominated me...

I don't think many of you have NOT been nominated, but I'm also picking up Dame Eleanor Hull, New Kid, Pilgrim/Heretic, and Dr. Virago. And anyone else who I forgot!!

1. Put the logo on your blog.
2. Add a link to the person who awarded it to you.
3. Nominate at least 7 other blogs.
4. Add links to these blogs on your blog.
5. Leave a message for your nominee on their blog.
Posted by medieval woman at 10:51 AM 6 comments:

Okay, so we all know the Pink Ladies Pledge, right?

I failed horribly to live up to this code on our ridiculously long journey home on Monday.

1) We were on the airline equivalent of a milk run. Amsterdam to London Heathrow (3 hour layover); 8 hour trans-Atlantic flight to Minneapolis (2 hour layover); Minneapolis to here. So, you know how you just feel like a big ball of grease when you fly? It's because of the insanely dry air on the plane. It makes your body think you're in the Sahara, so it freaks out and says, "Moisturize, moisturize, aaaarggghhh!" And the plane is neither cold nor hot, just uncomfy. So, I was a shining, slightly gross, Medieval Bee-yotch for the entire 24 hours between when we got up and when we could finally go to bed again.

3) Also on the trans-Atlantic flight, there were movies. Dr. Virgao asked what I watched on the way out (Presumed Innocent), but what I watched on the way back was much more entertaining. At least for some. I decided to watch "A.I. Artificial Intelligence," which I love, but which always makes me sob at the very end when he gets to spend the last day with his mom and she tells him she loves him (I'm tearing up even now). So, I was crying my eyes out and then when it was over, I looked at what TD was watching: "Bridges of Madison County" (okay, here we go). That movie makes me cry even harder (when she doesn't get out of the truck!! Oh god!). I saw that TD was already tearing up and so we shared his earphones and watched the last little bit together. Both of us were sobbing by the end. On the airplane.

And after listening to the music on the credits and weeping a bit more, we looked up and saw 3 little pairs of coke-bottle glassed eyes staring at us in wonder. TD turned to me and asked, "You would have gotten out of the truck to come be with me, right??"

- I think we had a slightly *tipsy* cab driver on the way home from the airport. Also, his cab had the brake light, check engine light, and the ABS brakes light on the whole trip. And he told us that he has 10 kids by 4 different women. I told him that he must be a busy guy...

- When we got home, the furballs just glared accusingly (where the f*ck have you been? what other cats have you been cheating with?); then they showed us to the Furballs of Protest they'd left for us. Thanks guys.

- TD's and my current situation continues to boggle the minds of the border guards. We get a lot of this: "Okay, so you two are married, she's an American citizen living in America, he's a Dutch citizen living in another country not Holland. And your married. Why??" So, we have to keep explaining these things and they just get more and more suspicious. We're legitimately starting to worry that they will start making it difficult for TD to get into the country. The border guard in Minneapolis said as much, in fact. So, we're going to need to start the Green Card process pronto and just hope that the market this year yields something better.
Posted by medieval woman at 9:38 AM 7 comments:

Okay, so last night I had a dream that 2 of my students in a class I was teaching were threatening to take all my internal organs. They were leaving notes for me saying that they would strike on "a Saturday." I took the notes to the campus police and they were able to find out which students they were by doing DNA testing on the paper.

However, they weren't able to do anything to the students, so I still had to teach them in class. The police wouldn't give me a gun (I asked), but they were able to give me a taser disguised in the handle of one of those squeegees that you wash windshields with.

Where the hell did that come from, I ask you?

I also had a second dream (I remember these frequently), where I had joined the space program and lied about having gotten a Ph.D. in astrophysics. I was getting ready to go on a shuttle mission and I was terrified because I had no idea how to work any of the equipment. But I was also scared to tell anyone I lied, because we all know what happens when NASA gets mad, right?

I was so relieved to wake up...
Posted by medieval woman at 1:28 PM 5 comments:
Labels: stupid dreams

Thoughts from the Road - Still Kickin'!

Well, I said in a previous post that there would be light blogging ahead - and indeed there was! So, here's what's been up:

Earlier in July I had one of the most amazing, intellectually stimulating, wonderfully fabulous weeks of my academic life. I made many new friends, many of which I continued to see at the conference that followed. Med. Camp was first rate and I'm so happy I went.

Just finished up at the NCS conference in Wales - got to see Dr. Virago quite a bit (yay!) - sitting at lunches, out and about, and best of all - crawling around on a lovely castle (Kidwelly to be precise). The murder holes were very cool. And the sheep. The sheep were cool.

The conference itself was good, but incredibly draining - even when you're there with friends and aren't in a particularly precarious position (i.e., looking for a job, looking for a publisher, etc.) it's still a draining process. I, personally, wasn't blown away by a lot of the papers, but I did skip the last two plenaries (which I heard were wonderful). My paper went fine and that's good. The best thing about the conference was seeing very old and newly-minted friends and making a few more. It was the first time that a conference was so social and so socially variegated - i.e., I hung out with many different people. I was happy to come down to true TD-land last night to see him.

Which brings me to another big thing in my life right now. There are many bad things happening in TD's family at the moment and we've been dealing with this for the past month or so in absentia and now in person. His mother is now almost completely blind (she has macular degeneration) and we found out a couple of weeks ago that his stepmom (who we adore) has very advanced cancer - she either didn't know or didn't tell anyone about the symptoms, but it's not looking good. TD's brother is involved in a horrible situation with his girlfriend and his two children (unfortunately, I can't blog about this in much more detail), but he hasn't seen his kids since before Christmas and she's drained his bank account, taken one of their cars, etc. So, his father is almost devastated beyond belief - he feels like his whole world is falling apart.

TD and I are spending a week here (he's already been here for 4 days while I was in the UK) and we're trying to get his mom into a nursing home, trying to spend time with his brother, dad, and stepmom. But it's very hard on TD to see his whole family in various kinds of crises. Today we hung out in Haarlem (where we're staying at some friends' house while they're out of town). We sat in the old city centre, in front of the beautiful, 15th-century St. Bavo Kerk, had some beers at cafe and took in the sun. Across the square, 2 men playing the trumpet and the accordion were playing "Hello Dolly". It was a surreal and lovely moment.

At any rate, I hope you guys are all doing well!
Posted by medieval woman at 3:13 PM 3 comments:

I'm having fun at medieval camp - will be here the rest of the week. The other kids are cool and the counselor is terrifyingly brilliant. I am learning how to make chain-mail lanyards. Haven't yet hit the target in archery, but have come close. 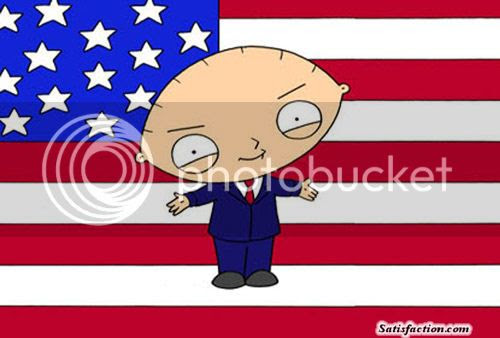 Today promises to be a RED LETTER day. Woke up to the smell of TD making waffles and sausage for breakfast. Later, we'll go downtown to the parade and then over to some friends' house for an early potluck. Then, fireworks at the highschool!

I love the 4th - I always wear some form of red, white and blue - TD is wearing blue shorts and a red shirt with white lettering that reads: "Trust me, I'm a Doctor". (The Dutch flag also happens to be red, white, and blue). We'll be putting our "Obama '08" sticker on the car today as well. Things are looking up.

Perhaps even better than the fireworks (at least it'll linger much longer), I just received a $2100 tax return from Dutchmanlandia (i.e., where I lived last year)!!

Independence from debt - Fucking righteous, dudes.
Posted by medieval woman at 11:38 AM No comments:

Went to a family reunion this last weekend and had A FABULOUS TIME. Much more fun than I've ever had with my crazy extended family. There were around 40 of us and 6-7 of us ended up staying up WAY too late drinking and playing Shanghai Rummy. TD is now officially part of the family - he clicked very well with my multiple funny, redneck uncles.

There was kayaking, boiled crabs, margaritas, and 50s dancing. Medieval Family can party.

I will be traveling most of July, so blogging will be perhaps lighter than the average summertime blogging.
Posted by medieval woman at 2:02 PM 2 comments:
Newer Posts Older Posts Home
Subscribe to: Posts (Atom)