It was so good to see everyone last night at the blogger meet-up - Morgan, where wert thou? I'm sorry we had to flee before 8pm - we had reservations at a tapas place with some friends. But I was so happy to meet some new folks and to see old ones I hadn't in a while! Sisyphus, you're just as cool in real life as I imagined - Flavia-Flave: I'm sorry we didn't get to chat more! Dr. V, What Now and heu mihi - great to see you all! And SEK, lovely to meet you and your wife and Horace, nice to see you as well! Rebel Lettriste - sorry I had to run just as you sat down, but we'll meet up again soon I hope!

MLA this year was completely fine - because I basically didn't attend. I had three interviews and then fled the hotel for the city (wharf, sea lions, seafood, trolleys, etc.) TD and I had fun exploring. This was also a year when tons of friends happened to be in the area, so we had a lot of meet-ups as well. 2 of the 3 interviews were lovely, but the last one seemed to be populated by aliens. They were weird! It's not that I felt like I flubbed anything, I just felt like these beings from another planet were still trying to learn our "human ways" so the reactions were....completely lacking. Very odd.

So, today is Golden Gate park and then we're off to Napa for New Year's - we've already bought so much wine! But there's more to be had...I hope everyone's New Year is wonderful and that everyone gets good news soon!
Posted by medieval woman at 12:17 PM 5 comments:

Going off the grid and a blogger meet-up reminder

We leave tomorrow to head west (hopefully we'll get there and not end up sleeping in an airport somewhere) - so, I'll catch you guys on the flip side - 2009!

If anyone needs a quick reminder on the date, time, place, etc. of the MLA Blogger Meet-Up, just send a quick email (medievalwoman1@gmail.com) - I'll be checking email regularly, 'cause that's how I roll. And Morgan, glad to hear that you'll be there and on someone else's dime! Looking forward to meeting you all for the first time, or again.

If I haven't yet sent you the info - and Rebel Lettriste and The Swain, I'm thinking this might be you guys! - send me a quick email and accept my apologies for flakiness!
Posted by medieval woman at 11:32 AM 2 comments:

Everyone knows how terrifyingly addictive F*cebook can be, yes? It's great to catch up with old friends from the past and can be rather jarring when you realize just how long you've been out of highschool (not that I've felt that way, mind you...). But here's the thing, something very strange and very cool has happened. I might actually call it a holiday miracle if I have one more glass of wine...

S'okay. When I was a little girl, Medieval Mom and Medieval Pop got divorced (amicably) and MM started dating the man who would become my stepfather for a time. I never liked him and he never liked me. He didn't treat my mom very well and, well, there you go. He had 3 kids - 2 girls and a little boy - all of whom I got along with pretty well. I am a "singleton", so I never grew up with siblings, and I thought it was pretty cool to have some. The oldest girl and I were the same age and were in the same grade in school. Our parents got married just before highschool and I had to move to their town, which had a much better school system - it was a smart move - but try telling a 13-year-old that! My step sister was popular, had lived there forever, was skinny, had perfect hair, etc. We went to the same highschool and I was always known as her stepsister - the kind of kooky girl in French Club and on the literary journal staff. I took college classes my last year. It wasn't the happiest time for me - I blossomed into full geeky splendor in college.

Sorry this is a long backstory. My first year of college, MM and my stepdad got divorced - it wasn't amicable. He was a dick. We were still on very good terms with the youngest of my stepsisters, who was upset because she felt like she was losing my mom. But the oldest sister didn't like this. She came to our new house, screaming and trying to kick in the door, telling us to stay away from her sister. I was a hothead and went out to confront her and threatened to call the cops. There was a struggle and finally Medieval Mom pulled us apart and told her to get lost. That was the last contact I ever had with her. I was in college out of state; she was in state and our parents were divorced. So, our already strained relationship throughout highschool just exploded.

Over the years of living in the same town, my mom has run into her a couple of times and it was always nice - she seemed to have mellowed and asked after me, etc. I knew she'd gotten married, had kids. But I hated her dad and I didn't want to go back to that time. I didn't go to our highschool reunion (not b/c of her), but I thought she'd be there and it would be highschool angst all over again.

Enter F*cebook. In a fit of nostalgia I joined the group for my school and graduation year and it's freaky to see names and faces that I recognize yet don't. It's very nice to see what people are up to - I remember my old Chemistry class partner who used to crystalize our stirring stick during lab, he's now in L.A. making commercials! I saw that my ex-step-sister was also listed and thought long and hard about whether I wanted to "friend" her - but then I thought - what the hell, friend liberally!

We've been exchanging emails for a few days now and I honestly didn't know how much that last interaction we'd had (nay, fight!) had remained in my mind all these years. It's still a traumatic thing for me to remember. And I emailed her and said that her kids are beautiful and asked how she was, and we've been talking ever since. I finally told her how sorry I was for being such a hothead and how much I regretted all the things that happened, not just on that day. She wrote back immediately saying that she'd been wanting to say the same thing for years - she said she should have been so happy to have a new sister, but we were young and insecure and protective of our parents, and she let that opportunity pass by. I started crying so hard; it was so meaningful to read that.

So, now I reconcile with someone who was a part of my life for a decade and then wasn't a part of it for another decade - but she always was. Does that make sense? We're sharing old memories of boys, 80s bangs, stupid songs, taking her dad's truck out for a joy ride (when we were 14...ahem...).

1) TD and I went to Williams Sonoma today to buy a panini press (yum!) and I decided that we needed a couple of other things, like a new wooden spoon (we only have ginormous serving spoons - we just need a stirring spoon and they're all up in Dutchmanlandia because our lives are spread across 2 households in 2 countries...). But, any-hoodle, I pick up a $7 wooden spoon and GET A SPLINTER! Off a schmancy Williams Sonoma spoon! Bastardo-spoonmakers...

2) I have to prep for interviews now and I don't wanna. And I have to by a new sweater to wear under my suit jacket b/c junky, mutant moths attacked my other marino wool numbers.

3) We are making pork schnitzel with sauteed arugula tonight.

4) Went to my department holiday party last night and it was lovely - I like my colleagues. I want to stay.

5) I have to start working on my book again. 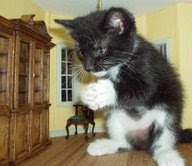 One set of exams and grades done; one more to go. This is "Blitzkrieg" grading at its best...

As for the Blogger Meet-Up, we're still on for the evening of the 29th at 6-ish at the first place I emailed you about! If you need confirmation or more info, knock off a quick emailto me and I'll give you the skinny. I'll send a quick email before Xmas just to make sure we're all at the same bar.

So, from what I'm hearing, the 29th is looking good for all who've responded - I'm not meaning to be Medieval "Quick on the Draw" Woman, but I know how quickly conference schedules fill up! So, let's say a little more firmly than tentatively that December 29th will be the meet-up.

1) What time? Options are:
a) early evening (5-ish?) snack/appetizer/drinks
b) dinner
c) after dinner drinks/snacks/appetizers/dessert (or, in my Hobbity case, a second full dinner)
d) breakfast
**I would prefer the evening just because TD and I will be sightseeing a lot that day. But that's just me - majority rules!

2) Where? I don't have a desire one way or the other. We're staying at the Fairmont, but we can do one of the other hotels (but will they be jam-packed?). If someone knows a local, easy to get to restaurant, let me know! Any preferences? We could choose the bar at one of the alternate hotels (i.e., not the Hilton or the Marriott), which won't be as crowded...

This is so exciting! I can't wait to see everyone! Anyway, keep passing the word to anyone else and I'll wait to hear more from folks...
Posted by medieval woman at 4:34 PM 9 comments:

So, I thought I'd take point on this (unless someone else already has! If so, let me know!) - many of us will just happen to be in San Francisco at the end of this month for a little thing we like to call The Deadly Gauntlet of He...(*ahem*). I mean, MLA. I know that Flavia, the Coglet, heu mihi, and Morgan will all be there...anyone I'm missing? The more the merrier!

So, the questions are: Do ya'll wanna meet-up? When? Where? I figure that we should make it an evening, either for dinner or later drinks, because we'll all have scads of interviews during the day. I know that there are likely going to be other friend meet-ups, but it would be lovely to see you all - many of you I've never met!

TD and I will be driving in from "points unknown" (read: wineries in the Lodi region) on Dec. 27th, and we leave to go to other "places to be highly intellectual" (read: Napa wineries) on the 30th.

What are your thoughts, bloggies? I wanted to put this out there early in the hopes that your schedules might still be open.

Let me know - email at: medievalwoman1"at"gmail"dot"com or just comment hereabouts. Please let anyone else know who might not stop by here and who would still be interested in having the blogger meet-up at MLA.

Updated to Add:
It looks like people's schedules are still pretty open - since many of us are coming in on the 27th, we should probably steer clear of that evening. Flavia would prefer the 29th and the others I've heard from haven't yet expressed preference for either, so shall we begin to narrow this down to the evening of the 29th? We'll wait to hear others who chime in (Morgan and Sisyphus, this means thee!) - exciting!
Posted by medieval woman at 10:57 AM 10 comments:
Newer Posts Older Posts Home
Subscribe to: Posts (Atom)