I went into Dillards to get a single make-up compact. I left with a bunch more face stuff, a pre-ordered gift with purchase (which TD will have to go pick up for me while I'm away - I'm sure he'll love that), a new pair of shoes (see below - who doesn't always need a black flat?), and a mauve sweater shell with kicky pleats at the bottom for $27 ON SALE FROM $109!!!!! 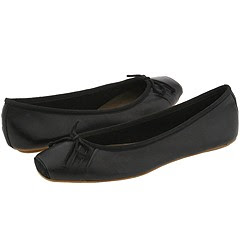 these are Jessica Simpson - I feel like I should be slightly embarrassed about this...


P.S. But on another note, TD and I got our tickets out to California for Xmas, MLA, New Year's, etc. for only $430 each!! And that's all the way across the country, folkses...
Posted by medieval woman at 1:33 PM 7 comments:

Our beloved boys in orange have just lost the quarter finals of the Eurocup...van Nistelrooij scored our only goal.

TD mourns in front of the television and I couldn't even watch the last minute or so. Where was our defense????? Offence?????

Okay - this is just for fun - as begun by Belle (although this list isn't near as long or varied as Belle's!):

I am 33 and I'm not counting the teaching jobs I've had throughout and post grad school (which equal 6 different institutions).

- Waitress at a retirement center restaurant (became an ace at avoiding "handsy" old guys)
- Worked at a local video store
- Adult literacy tutor
- Bartender at a sport's bar (I am still a licensed bartender - I hold a degree in "Mixology")
- Bartender at an upscale strip club (I was fully clothed - tuxedo shirt, bow tie, cummerbund, and bright red nails!)
- Waitress/Bartender at an off-track betting place (got a $300 tip once)
- Bartender at a Harley bar
- Receptionist at a real estate office (a.k.a. the 7th circle of Hell)

Random Bits of Out of Shape Fluff

I did about 45 minutes of different kinds of cardio - a little Precor, a little treadmill, a little recumbent bike. I stayed on two of them for over 20 minutes so I did get the old heartrate going. And boy, was it going. I am SO TOTALLY out of shape that I thought at one point I was going to hurl.

And there was an over-baked, stick figure next to me that seriously looked like she was going to break the elliptical machine she was moving so hard. And she wasn't dropping even a bead of sweat. I silently hexed her and kept my eyes on the clock in front of me and listened to my Tears for Fears in an effort to achieve a zen-like state.

But, overall it was a good beginning. I'm going to take little steps. Smaller even than baby steps. Zygote steps. And I hope that in a week or two I'll see improvement!
Posted by medieval woman at 10:50 AM 3 comments:

Actually, it's just one memory that hit me really powerfully as I was reading Sisyphus' thoughts on graduate school parties (as opposed to faculty parties) just now. I'm not sure why this in particular came to me, but it's kinda funny and totally says volumes about...well, me in grad school and the early days if TD's and my relationship.

Picture a snowy night in late March of 2001. TD and I had been hanging out a lot since Feb 9th, when we met. Initially, we had Fraught Issues (i.e., he had a girlfriend back in Holland who he'd just started dating before he left to come to the States for a year exchange), so we were just friends. And, apparently, were secretly falling into deep luuuuuuv. Alcohol was a big part of grad school parties, of course, so at this point, there was a bunch of us in the kitchen of JG's apartment doing lemon drop shots and listening to Thriller. TD and I were talking and laughing as just friends and he made a joke and then turned to get more lemons and I began to laugh so hard that I ended up falling on the floor and rolling (yes, rolling. Like a billiard ball) under the kitchen table. He pulled me out by my foot and asked if I'd hit my head. I wasn't feeling much of anything at that point, so I somehow (in between giggles and snorts) indicated that I hadn't. Then he said, "I think I'm in love with you."

What followed was an Intense and Emotional discussion about What To Do! It was epic in the way that only *schooltime* love can be - I remember saying that even though I was an "American harpy stealing him away from the bosom of his homeland" (I told you: epic), I was morally certain that he shouldn't go back at the end of the year, but should stay here for grad school where we could feather our love nest (to be honest, he had already begun to think about staying for the full Ph.D. even in the fall semester before we met).

So, the rest is history. But I will share one more tidbit from the very first night we met at a grad student social hour. We said "hi" and I asked him where he was from (he hadn't been in the country that long - I wouldn't have been surprised if he'd still been wearing wooden shoes). Then he asked me where I was from and when I told him, he got a look of rapture on his pure little un-American face and cried out,

Apparently, he'd been watching King of the Hill and really, really wanted to meet one.

How can you not love that?
Posted by medieval woman at 1:46 PM 9 comments:

A different kind of grading jail...

It's June and I'm not on the quarter system (that's a shout-out to you, Sisyphus!) - so, why am I still grading? Graduate papers. It's not grading per se - all the grades are in. However, I'm now commenting on their papers so that I can return them. I put this off until the end of May because of the article revisions I was working on, but now I need to get these done so I can begin my Summer Of Work and Toil and Productivity!

The great thing about undergraduate papers? They never want them back.

So, that's pretty much what's going on in this neck of the woods. My friend had her baby this last Sunday and I went to see her yesterday and brought Thai food take-out to the weary parents. The little sprog was all red, but very beautiful.

Ooo! Ooo! And I've found the pendant light fixture that will one day hang above TD's and my dining room table! Voila:

Our dining room set is basic dark wood table with matching chairs that have a chocolate colored upholstery.