More from the incubator...

We're getting this! We can do this. Things are getting better and my anxiety was slightly less today than it was yesterday. Does this mean that hormones are working their way through my system? Surely it does.

We took some fun pics today:

May I present Sir Guy - 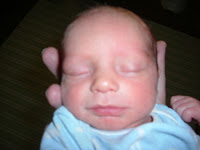 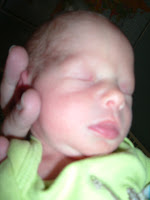 How jaunty are they? Do they pricketh throughout the countryside looking for damsels to rescue??

1) My mother leaves tomorrow and je suis desolee! This hasn't happened before. She comes back in a week and a half for 11 days - JOY! Who am I?? And she's moving here in a few months. Thank God!! Who knew?

3) I am now taking a natural organic iron supplement to help my anemia rather than the caustic guerilla pills they prescribed for me (Dr. C said I could) - those killed my gut and these are easy on it. I am now out of the range where they suggest transfusion!! (I'm an 8 - normal is 12-16) I'm inhaling spinach, watermelon, and red meat.

4) Periodically, one of the boys will let loose a single, blood-curdling, ear-piercing scream. We call it their primal scream therapy.
Posted by medieval woman at 6:47 PM 12 comments:

Rawr! and the First Night... 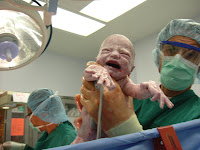 Yes, my friends - that is Guy! Miles was born exactly one minute later...our little ones arrived on Monday (Labor Day??) at 35 and 1/2 weeks. They didn't have to spend even a minute in the NICU, which was amazing and they came home with us yesterday. They are small, but beautiful; immature in some ways and mature in others. The Furballs are terrified but curious - what could these gabbling things be??

What follows are some of my observations and feelings - they're all jumbled up, but here they are!

1) This sounds cliche, but I am totally in love...pure, unadulterated love.

2) I am also stressed out beyond my wildest ken - how can these two emotions co-exist so much? Last night - our first night at home - was so insane. And they weren't even fussy per se! It was just being home, needing to get up every 3 hours at least, to feed them, not really sleeping more than 3-4 hours. I know - I need to get used to this. TD and I are reeling.

3) Medieval Mom is also here until Thursday, so I can't imagine how it would be were she not in residence.

4) The birth was steeped in stress, particularly the days following it, which is why I'm dealing with such anxiety at the moment, I think. The c-section proper was uneventful, even textbook. But we had to do it far earlier than planned because my BP was just consistently way too high. After that, I had a series of events including crashing a bit because of a wonky reaction to something, perhaps nausea, I'm not sure, it's all a blur, but it was very scary for TD. Then we thought all was well but those damned BPs kept creeping up again and they wanted to keep me longer. This was the source of much stress, but finally they just kept me an extra day and sent us home.

6) Will my hormones eventually regulate themselves? Will I ever feel normal again? Will my body recover from the c-section? When? Will every day get better?

7) Miles is already stepping forward as the "freaky" child - he has so many little quirks and he's not even 6 days old. Guy is all about "slow and steady wins the race"...

8) Tomorrow (yes, Sunday) is our first outing to the pediatrician - what will we wear?