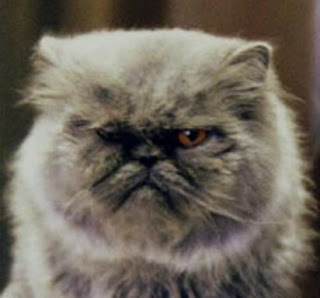 Realization #1: I need to get some hot-weather conference-y clothes. Right now. The first two days of the conference were unbelieveably hot and humid (at least for me - where I live is still kinda cool). I was wearing the wrong clothes! Especially for the book exhibit.

Realization #2: Never stay at the Lees Inn again. Smoke saturated room. Bad. Make Radisson reservations as early as you need to, but don't go there again! They had to "re-set" the hot water every morning - we had to call down to the front desk and make them turn it on so we could take showers at the (apparently) ridiculously early hour of 7:30 am.

The hotel notwithstanding, K'zoo was delightful this year with the occasional awkward moment and bit of excitement.

Wednesday: Drove to K'zoo early to meet up with friends who were going to have to leave early Friday morning. Had an awesome dinner with them and went back to the rat-trap - I mean "hotel" - to watch Fresh Prince of Bel Air.

Thursday: Went to pick up J at the airport - ate Steak and Shake for lunch (much of any time spent in the US revolves around me eating food I can't usually get). Went to afternoon sessions and hit the book exhibit. Bought several books and a manuscript leaf (it's one of my vices). Ate and drank large quantities of alcohol at Red Robin - caught up with J and laughed lots and lots. Stayed up late in our room talking about my syllabi next semester - who says medievalists can't have slumber parties!

Friday: Things get cooking! Have a lovely breakfast blogger meet-up with Dr. Virago, Tiruncula, New Kid, Scott Nokes, Michael Drout (who I hadn't seen in a couple of years - lovely to see him again!), Another Damned Medievalist, Karl Steel, etc. It was really great to meet everyone - as New Kid mentioned, most people looked exactly how I'd imagined.

Went to the 10am session and met up with one of the speakers whose work I *adore* and secretly covet. I'd met her once when she gave a talk at Dutchman U and had gone out to dinner with her and found her to be lovely and excited about how our work connected. She asked if I could send her some of my work (we're contributing to the same collection).

Right after the session, I get a panicked call from J saying that her eye is messed up and she thinks she has a brain tumor. :) I go to pick her up at the building she was in and one of her pupils was *hugely* dilated even in the bright sun! So, we blow off the afternoon session and start driving around downtown Kalamazoo looking for an ophthamologist's office. We finally found one who gave us the emergency on-call doc's number and only had to wait for a half hour to be seen (btw, if anyone needs a rec for a great eye doctor in the greater Kalamazoo area, let me know). I think we were the most exciting thing to breeze into that office in about 5 years. The whole place was a-buzz with words like "medievalist", "emergency" and "in from out of town"...

So, J sat nervously in the high chair while the doc checked her eyes and I calmed her by reading our horoscopes aloud from Allure magazine. Finally, it was concluded that the dilated pupil wasn't a brain tumor or an aneurism or a stroke, but the result of J washing one of her smudged contact lenses in Visine that had an antihistamine in it. Her eye reacted to the antihistamine and dilated - it was back to normal in a few hours.

We went back to the Rat-trap and met up with our third roommate for the night, J2, who'd just gotten in from the airport. Went to lunch and made it back up to the conference for the 3:30 session. Bought more books and drank some unimpressive wine at the wine hour. Saw advisor and a few people I knew...

That night we went to dinner and to see Spiderman 3 in digital!

Saturday: Awoke early for our 10am panel - I chaired the session that J and I had co-organized, J2 presented a great paper and I met two other very nice people who were on the panel. Our panel wasn't highly attended (there are SO MANY concurrent panels!), but we had a great discussion that lasted the whole time.

Finally, after having been there since Wednesday afternoon, I opted to skip out on the afternoon sessions and head home - I missed the dance but hope that everyone had a great time!
Posted by medieval woman at 10:40 AM
Labels: k'zoo

Welcome back! I'm glad everything went well and that you had fun catching up with people. Also glad J did not have a brain tumor -- that certainly would have put a damper on things.

Sounds fantastic! What fun to be able to spend all that time with close friends!

For future reference, the Country Inn and Suites, just around the corner from the Lees, is quite nice and just as cheap as the Lees.

It was great meeting you at the breakfst! Hope we meet up again some time!

I unknowingly and accidentally dilated one of my eyes by handling a contact lense after I'd touched a medicated anti-seasickness patch. I didn't realize, but my friend saw me and started asking if I had a headache or something. We figured it out fairly quickly, thank goodness (since we were very far from any medical care).

Yes, J has always had a flare for the dramatic! Hilaire, the dance is indeed very funny - picture a gaggle of very sweaty, slightly tipsy medievalists of all ages and stages of their career dancing to Billy Idol! :)

Dr. V, thanks for the recommendation! If I can't get into the Radisson next time, I'll gladly try that out - the location was great, but the smoke was troubling.

And Bardiac, your story sounds extremely similar to what happened to J! The contact lens acted like a sponge that held in the medication next to her eye, which, of course, promptly flipped out at being exposed to strange chemicals. And the headache thing was important as well - if you have head pain, etc. with uneven pupil dilation, it turns out that it can be a sign of stroke or other brain trauma. I'm glad your eye was okay!

Learn something new every trip to K'zoo!